The murder of George Floyd on May 25, 2020, was one of the darkest days in the recent past. However, this callous murder was not an isolated incident but instead, a symptom of repeated police attacks on Black and Brown men and women.

Mr. Floyd, and others before him, was denied his rights when he was murdered by the hands of four Minneapolis police officers. MABL strives to work to ensure that others do not have their rights violated and to support racial equality and justice.

In the coming months (and years), MABL will continue to support efforts to rebuild and get justice for Mr. Floyd and the Black community. We ask that our partners continue to do the same and collaborate with MABL on initiatives that express our joint goals. Our successes in these areas will be for naught unless we acknowledge and continuously challenge anti-blackness and discrimination within our families, friend groups, law firms, and organizations.

While we acknowledge that many of our organizations are stretched thin at this time, we ask that you continue to do your part.   True partnerships can only form when we all commit to examining how we contribute to marginalization and oppressive power dynamics in inter-organizational interactions as well as our personal lives. MABL is confident that together we can produce meaningful, long-lasting change in the communities we serve. We invite you all to step outside of your own comfort zones, champion equality, and be willing to listen and learn from each other.

The Minnesota Association of Black Lawyers (MABL) calls on the Minnesota Bureau of Criminal Apprehension to expedite the investigation, submit the case to the Hennepin County Attorney's Office, and for Hennepin County Attorney Mike Freeman to immediately charge the police officers involved in the senseless death of Mr. Floyd with homicide. Additionally, MABL demands that Minneapolis Mayor Jacob Frey and Police Chief Medaria Arradondo launch a thorough independent third-party assessment of all aspects of the training, policies, practices, and culture of the Minneapolis Police Department resulting in public recommendations to end the inhuman treatment of its Black and Brown citizens. Following the recommendations, there should be a transparent implementation plan with milestones and performance metrics to measure the effectiveness of the changes in the short and long term.

The killing of Mr. Floyd is just the latest example of how the over-aggressive policing of non-violent minor crimes has resulted in the death of Black and Brown Minnesotans, undermining confidence in the police within communities of color. Often, in the wake of a homicide by police officers, a public smear campaign ensues against the victim, implying that he deserved to be killed. We call on Governor Tim Walz, Mayor Jacob Frey, St. Paul Mayor Melvin Carter, and our local and state officials to denounce this practice because our justice system holds that, even for the worst aggravated crimes, the penalty should never be torture or murder. Thus, not only must the officers involved in the homicide of Mr. Floyd be brought to justice, but the Minneapolis Police Department's policies and practices must be examined and changed to ensure that no more innocent Minnesotans die at the hands of the police.

Furthermore, the Mayor and the Police Chief must confront the culture within the Minneapolis Police Department that allowed Mr. Floyd to be brutalized and killed in front of four other police officers who did nothing to mitigate the situation. It is noteworthy that as the police officer was choking Mr. Floyd to death, his visible hand was in his pocket. This casual posture for someone killing a human being in broad daylight with cell phones recording is horrifying. This callousness shines a glaring spotlight on a culture that tolerates the killing of a Black man without any provocation. The disregard of Black lives within our criminal justice system perpetuates the officers' expectation that killing Mr. Floyd on tape in broad daylight with witnesses in 2020 has the same consequence as would lynching him and taking proud photos next to the dead body 100 years ago; absolutely nothing.

We are encouraged to see that swift, decisive action was taken to fire the officers. We hope, however, that this is only the beginning of a just process that includes the charging and conviction of the officers for killing Mr. Floyd and overhaul of the Minneapolis Police Department's practices. Twin Cities residents are frustrated with the culture of violence and racial discrimination within the Minneapolis Police Department. The County Attorney, the Mayor and the Police Chief must make clear that the lives of all Minnesotans - regardless of their race - are valued equally and will be treated fairly.

MABL's Point of View on the Chauvin Trial

As the Chauvin trial progresses, MABL will post weekly videos addressing issues relating to promoting equtiy and transparency with the trial tactics and court procedures. Let’s hold all accountable and have an understanding of the trial procedures as we push for justice. If you have questions or general comments, please feel free to contact MABL at Board@MABL.org.

This week's issue: Racial Equity and the Misleading description of this case as David versus Goliath.

This week's issue: It is ok to be angry when you witness a murder. If you are not angry, ask yourself why...

This week's issue: We need a mental health timeout...

MABL's Statement regarding the Chauvin Verdict.

Insight News' conversation with Al McFarlane: Deeper insight into the Verdict, the trial and what it means in the pursuit of sustainable justice for African Americans.

Ahead of the Derek Chauvin trial, we wanted to provide a document that you can share with your non-legal networks about the stages and prcocess in a Minnesota criminal trial. We hope the overview provides basic information about the process and in conjunction with the televised trial, allow for much needed transparency. Click here for the Criminal Trial Process Document.

Minneapolis, MN - We are Minnesota lawyers.  We swore an oath to support the United States and Minnesota Constitutions, both of which prohibit the government from depriving a person of life, liberty, or property without due process of law.  The right to due process-and its equal application to all citizens-is at the heart of any just society.

George Floyd was denied this right when he was murdered in the hands of four Minneapolis police officers.

Today, as the judicial system continues the constitutionally required due process of determining the guilt of these officers; we stand firmly in solidarity with Mr. Floyd, his family, and all those fighting in the quest for justice. 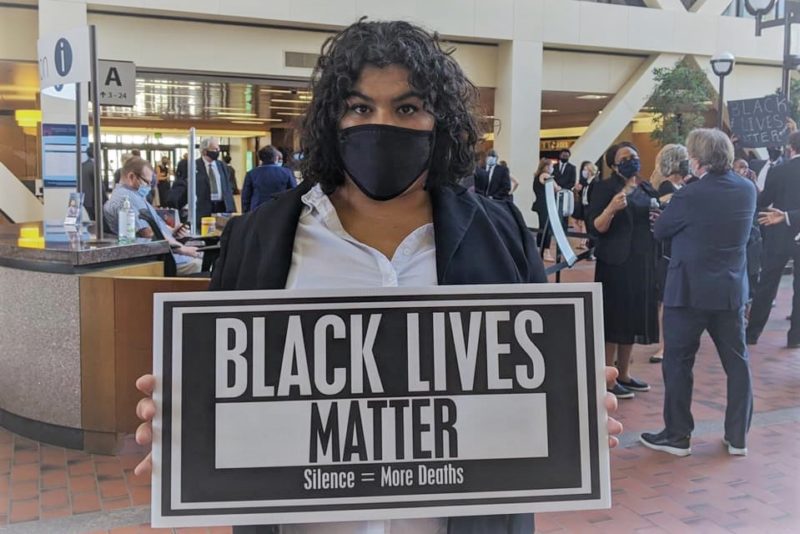 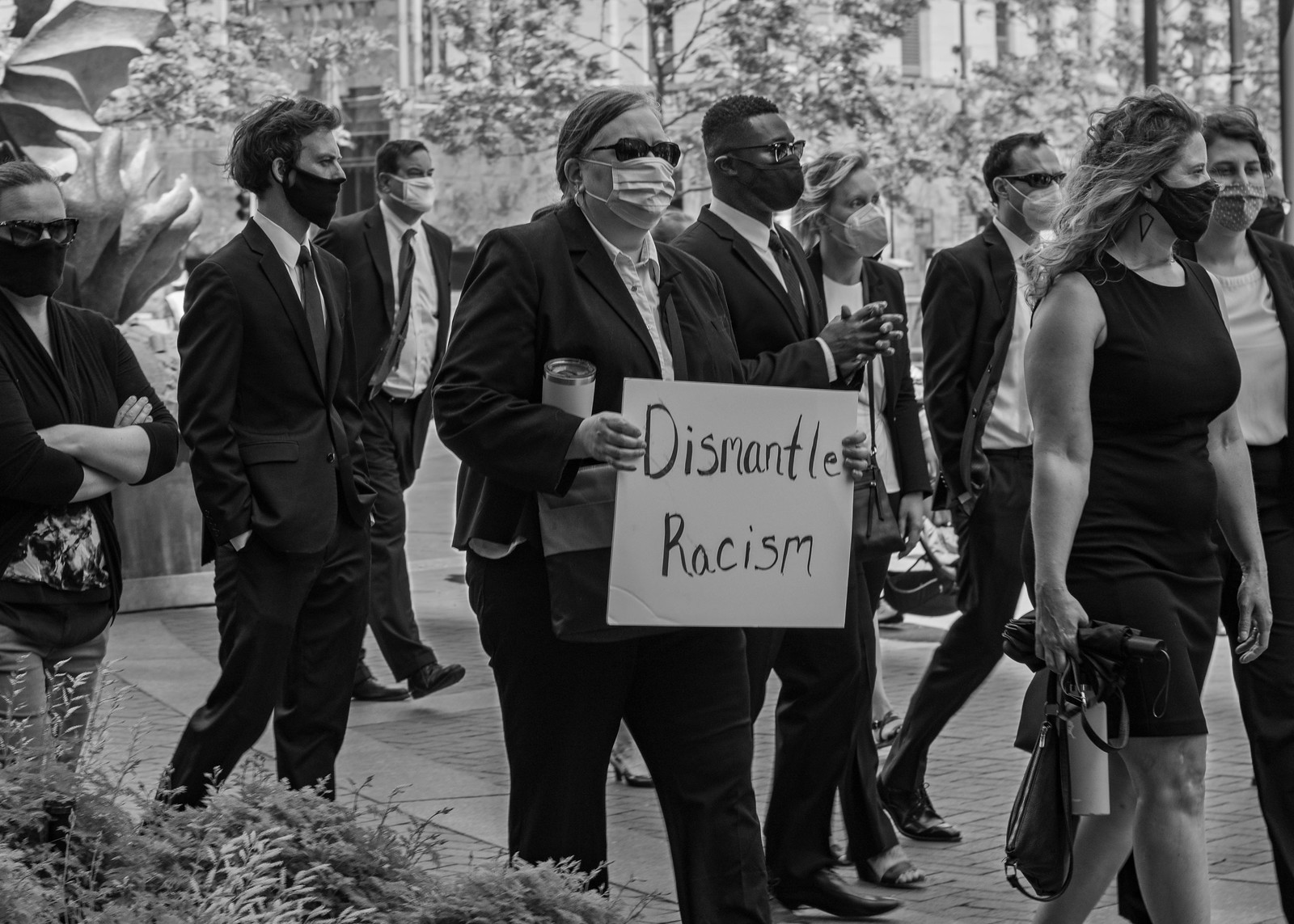 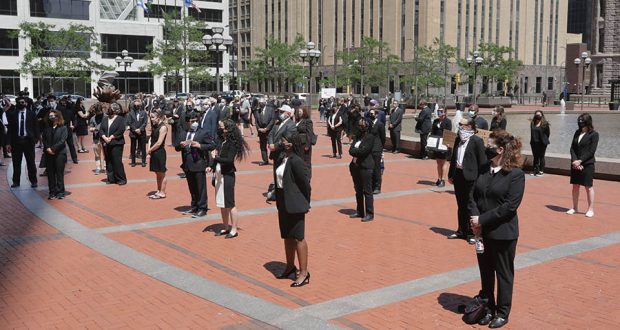 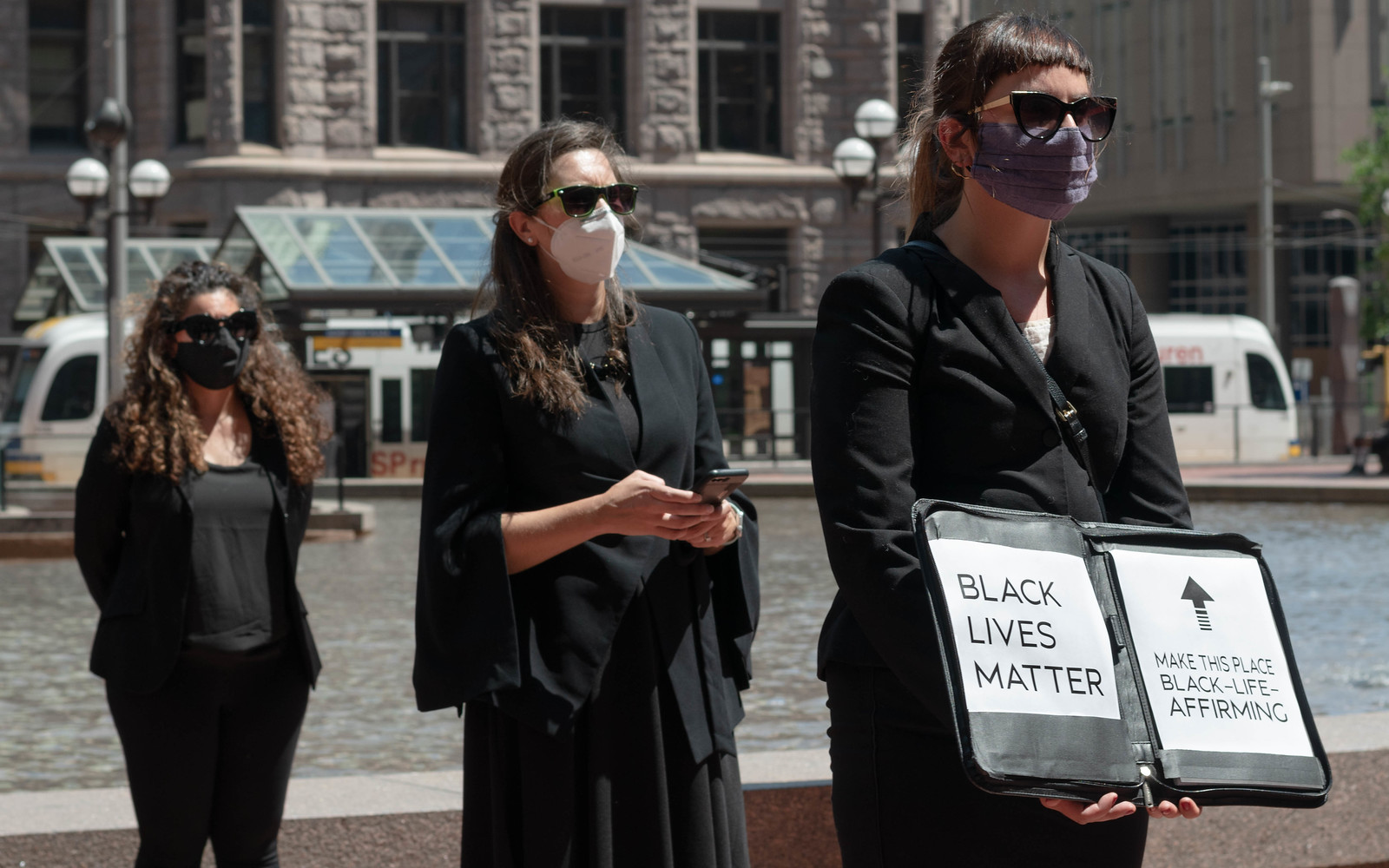 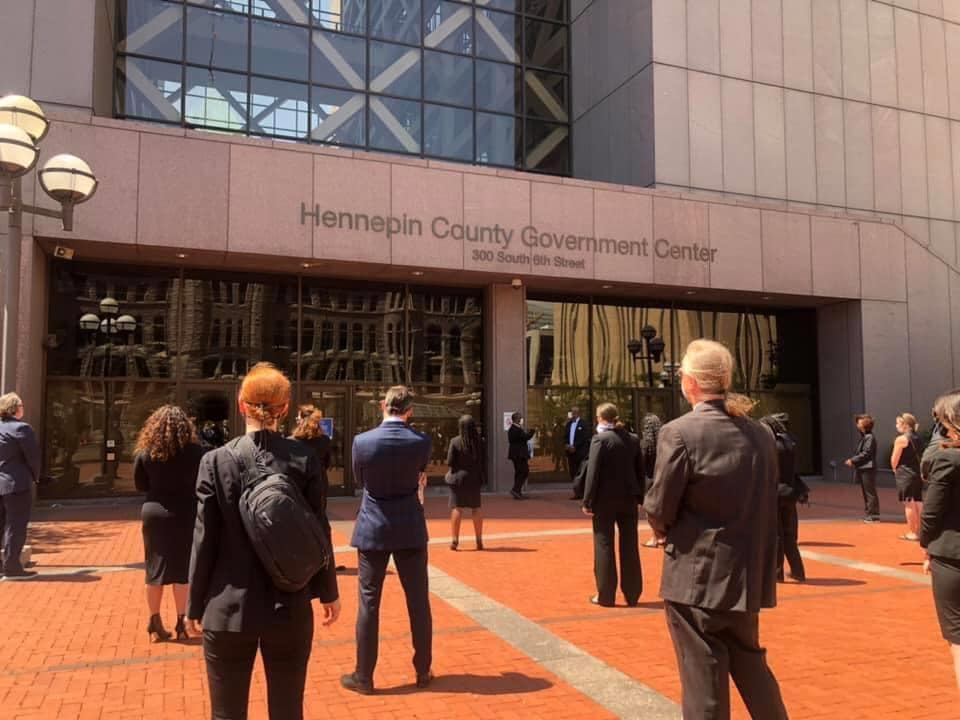 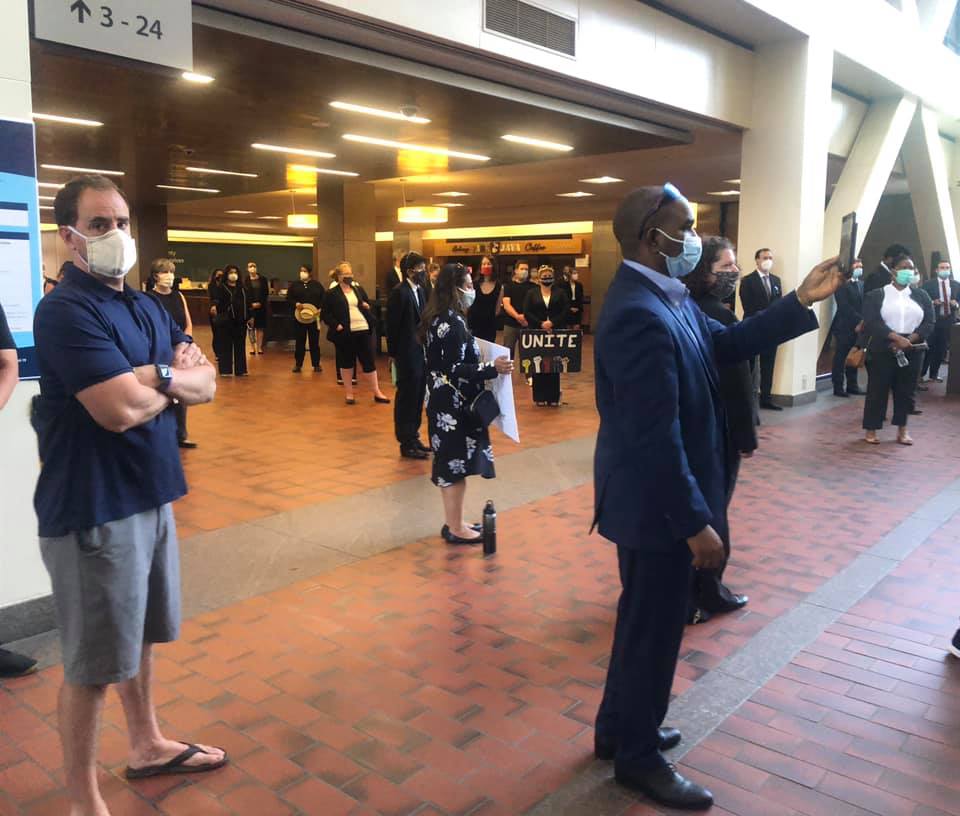 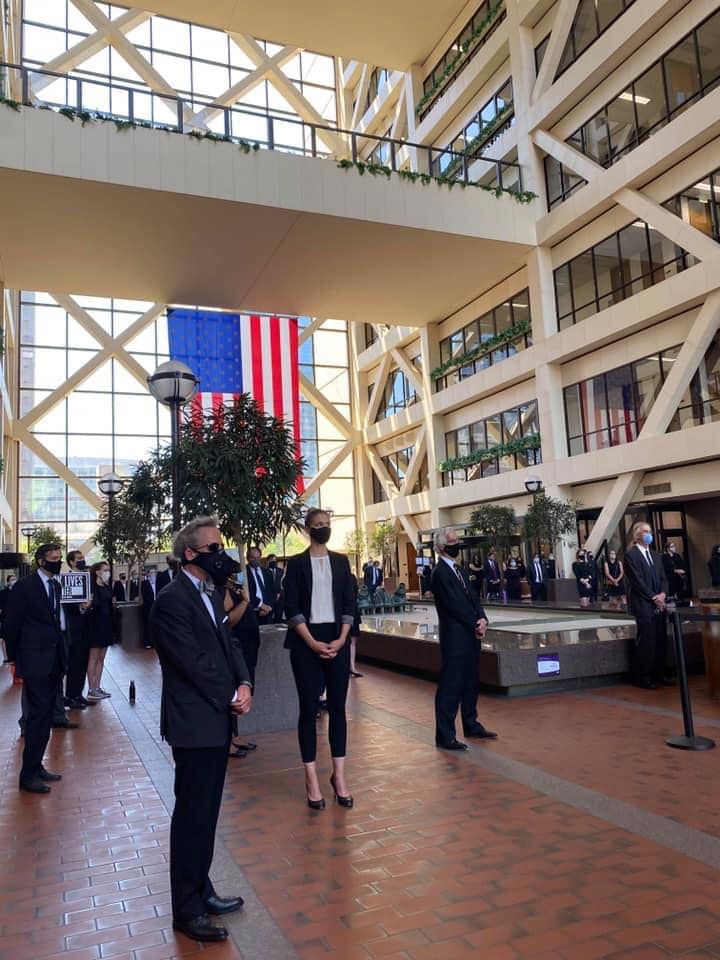 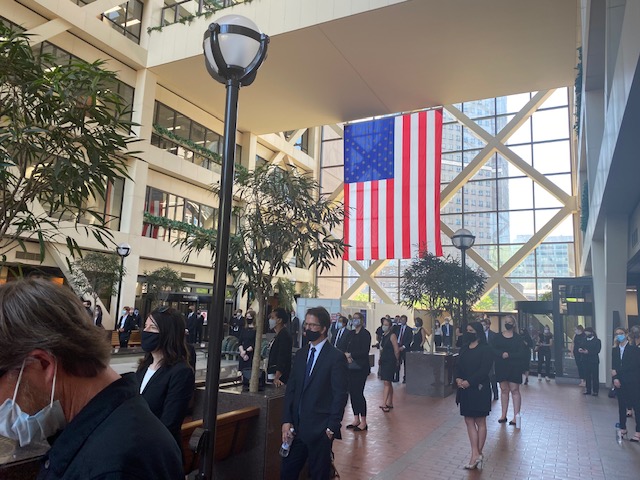 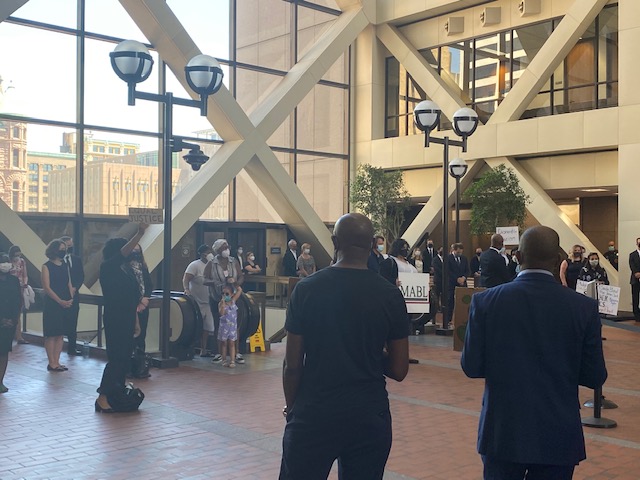 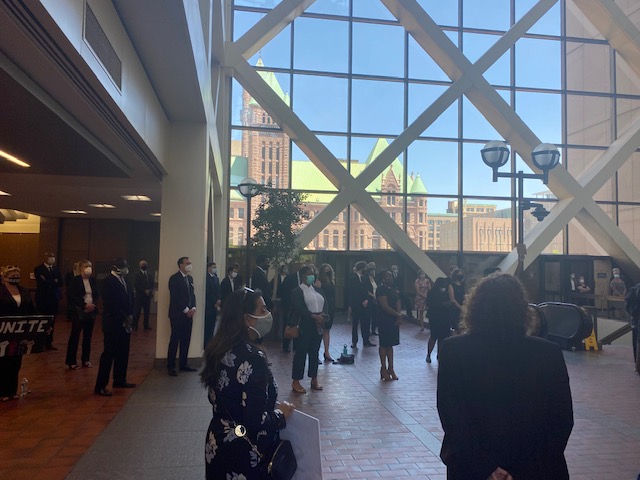 Minneapolis, MN - The senseless killing of George Floyd has galvanized people across the state, nation, and globe to condemn racism, injustice, and the over-aggressive policing of communities of color.  In this fight for justice and racial equity, attorneys and other professionals have stepped up to donate their time, skills, and knowledge.

Here in the Twin Cities,  thousands haven taken to the streets to demand justice, racial equity, and the affirmation that Black Lives Matter.  In some instances, this has caused  property damage and property loss to area businesses.  Despite the devastating impact this has had, the vast majority of business owners continue to stand  in solidarity with the protestors and their calls for justice.

To help assist impacted businesses, MABL has partnered with local community organizations and groups  to provide pro bono legal assistance to affected businesses and individuals.  We invite local attorneys and law firms to sign on to this effort. If you are interested in volunteering, please email us at MABLBoard@gmail.com ATTN: Community Rebuilding.

MABL thanks the law firms of Greene Espel LLP, Lockridge Grindal Nauen, and the University of St. Thomas School of Law for signing on to this initiative and accepting our call to action. Please consider doing the same.

MABL's goal is to work and collaborate with other affinity groups, business leaders, and legal professions to end racial inequities in the Minnesotan legal profession. MABL hopes that through concrete methods and measures, it can guide area law firms, public sector employers, and corporations to strive for racial equity within the legal profession. Though statements of support and solidarity are foundational and important, MABL hopes that Minnesotan organizations and leaders will push to do more to show their support and will encourage others to help with this cause. Inequity in the legal profession perpetuates inequity in the Minnesotan community. Please join us in this fight.

The Legal Rights Center provides resources to support our Communities during the George Floyd Murder Trials.

Below, please see a list of resources relating to initiatives by legal and non-legal organizations to provide social change in the attempt to provide racial equality for all.

Twin Cities nonprofits, community organizations and churches are gathering donations and coordinating cleanup efforts in areas damaged by the rioting that has followed the death of George Floyd in police custody on Memorial Day.

Explore this website to find ways to educate yourself and help through signing of petitions, numbers to call, places to support and donate, books to read, and ways to learn more.